Misinformation has been a vast and challenging issue throughout recent years, with the potential threat of it occurring only increasing. The impact of misleading information has been raised into the public attention especially in relation to the COVID-19 pandemic, with numerous hazardous unscientific practices and conspiracy theories gaining track.

Additionally, it is not unknown that deception can be used for malicious purposes – both by governments and individuals. Authoritarian states such as Russia and China utilised disinformation related to COVID-19 in order to achieve political gains, as described by the Center for European Policy Analysis (Dubow, Lucas, and Morris, 2021).

Conclusively, it seems the discussion on the topic is urgent and needed, if not inevitable. Some may say that such a dispute possibly endangers the right to free expression as, after all, most false information is generated and distributed by individual citizens and not companies, governments, or other organisations. It certainly is a valid concern as free expression is valued as one of the foundations of democracy and, consequently, most would not be favourable towards a society lacking it.

Historically philosophers approached the matter from a variety of perspectives despite that misinformation in modern understanding has not yet existed. Instead, their examinations were of an epistemological kind – observing and describing the process of obtaining knowledge.

Aristotle argued that in spite of most individuals seeking to explore their surroundings, they often opt for the easiest, most accessible, or even just the desired answer (Stroll, Martinich, 2021). As the world offers diverse shades of complexity, some may resign themselves to misunderstanding or defying the truth.

Not without similarity is the modern approach to news and media where one is most often disinterested in finding out the facts and thus may be misled by disinformation.

Centuries later, Rene Descartes proposed an antidote to that – according to him, people should doubt and distrust everything, even their own existence (Wikipedia contributors, 2021). Nonetheless, this method of hyperbolic doubt gives an opportunity to rethink and carefully examine the experienced information. Moreover, Descartes suggested approaching any subject as if it has been unexplored ever before, further solidifying the universally critical attitude. The truths scrutinised by both philosophers still remain relevant and seemingly urge the society of the XXI century to reconsider its attitude to knowledge and trust. 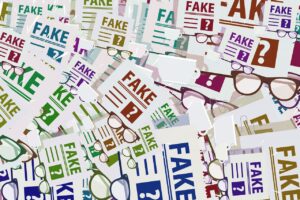 One of the vital matters necessary to fully understand the issue of misinformation is the analysis of the outlooks of the non-perpetrating parties involved. Knowing that people are often oblivious facts, it is easily predictable that society as a whole does not treat disinformation as a priority. Nonetheless, as increasingly more individuals are aware, eliminating the problem is beneficial due to the array of harmful and threatening effects of misleading information.

Consequences of misinformation can include, for example, a higher number of COVID-19 cases or a problem that is broader and more dangerous: the division of society and the slow erosion of uniformity. On the other hand, some may actively utilise misinformation for financial or political gain – those would likely stand in opposition to any reforms.

In correspondence, for most governments, it is a key priority to maintain a healthy and cohesive society as that is simply beneficial for its citizens. Active opposition to misinformation is their moral obligation; in practice, it is crucial for keeping law and order as well. However, similarly to the ones who, in theory, experience misinformation, a number of, in majority authoritarian, states tolerate or even employ it – often in order to maintain the status quo.

Additionally, even if a government attempts to target misinformation, it may be pressured into relinquishing such action by the social media companies involved. These firms have a vastly contrasting approach and policies, a result of their principal need being maximalising profit. When restricting misinformation, not only would they be contributing more resources towards monitoring suspicious content, but also not insignificantly limiting their business through restraining site traffic.

During the 2016 American presidential elections, approximately 4.1 million tweets concerning the candidates were generated by bots throughout the period of only four weeks (Bessi, Ferrara, 2016), engaging commenters – actual people.

A decline in these figures could result in a reduction in profits; hence, most companies are unfavourable towards a counteroffensive stance. In fact, the majority of regulations are established due to legislative restrictions or for promotional purposes rather than the genuine concern for the quality of the online discussion space.

Therefore, the ones who should provide the strongest support for the change are the citizens, they are the group who is most concerned. Furthermore, the people may be the ones empowered to do so through grassroots movements, should legislative actions prove insufficient.

Due to the rapid evolution of the issue, a number of countries have already implemented varied laws targeting misinformation. These initiatives, some more and some less successful, can provide an outlook on how to approach the problem most effectively.

The Netherlands can be named as one of the affirmative examples – according to the report by the Reuters Institute, the overall trust in media was at 59%, dramatically higher than most other countries (Newman et al., 2018).

This reflects the reliability of media in general – a result of the present policies and high quality of information channels. Additionally, the Dutch government is actively countering misinformation through awareness campaigns and an application of stricter standards for information (Robinson, Coleman, Sardarizadeh, 2019). Some may deem these actions as effective and thus sufficient, yet there are still means of further refining the quality of information.

A natural course of action accessible to governments and citizens are further restrictions and obligations directed at social media companies. Although at first, it may seem undoable or simply dangerous, it likely is the most effective mean of controlling the issue. The root of the problem is the seemingly free or even anarchical nature of the internet – in actuality controlled by monopolist companies such as Google or Facebook which lobby in favour of maintaining the “Wild West” delusion.

The freer the market or discussion space, the more it is vulnerable to major players and, in point of fact, regimes that employ disinformation such as Russia or China have immense resources at their disposal.

Thus, it is high time to regulate the internet as any other agora has ever been, an example being printed media, and simply require accountability for one’s untruthful statements. Social media giants may try to oppose that due to the profitability of the current situations; perhaps, that indicates the need to consider legislatively dividing them into smaller entities as is the usual practice in terms of monopolies. Not only regulatory action is needed and possible, however; an active defensive response to the present misinformation is vital too. Unfortunately, in line with Aristotle’s observations, people are vulnerable to fake news, as shown by the current prominence of the antivaccination movements. Thus, the citizens are in a need of a protector – the state – which would counteract via proven effective measures.

Such may be a task force and enforced penalties; the former operating in Canada since 2019 (Tenove, 2020) and the latter being introduced in France in 2018 (Funke, Flamini, 2019). Although the statistics are not yet available, clearly, the situation is gradually improving – at least in terms of public figures and disinformation operations of a larger scale (e.g. bot attacks). Furthermore, a mutual relationship of that kind between the government and the citizens is beneficial for an additional reason: the people are slowly becoming more and more concerned about the issue.

Perhaps it is raising awareness that is the most crucial action that can be undertaken against misinformation.

Education and the encouragement to think critically should not be underestimated – it is through them that a society resistant to deception and inaccuracy is built. We, as citizens and policymakers, should entrust ourselves to the Descartian formula: question everything you see, study it carefully, and analyse the provided data.

Alternatively, one may choose to request expertise or examine the applicable entries from fact-checking institutions. The simple act of inquiry is the first and ultimate step to knowledge and understanding as, when doubting, being manipulated is amply more challenging. Initiatives of that kind are already functioning in Australia, Belgium, and Denmark (Funke, Flamini, 2019), to name a few examples. The effectiveness of an anti-misinformation component introduced during the years of earlier education would likely prove to be appropriately higher.

The freedom of speech concern

The First Amendment of the United States Constitution recognizes the importance of protecting free expression and secures the rights to it of every citizen. However, despite that, it excludes defamatory and false statements (US Congress, n.d.) – a circumstance relatively reminiscent of the current dispute.

Although some may seem extreme, the acknowledged suggestions are fully in line with that sentiment, only penalising or discrediting situations that in court would fall under prosecution. Nevertheless, as has been aforementioned, such laws have the potential to be misused; it is manageable, though. For instance, France legally protects satire and only misinformation is effectively examined (Funke, Flamini, 2019).

Misinformation is undoubtedly one of the most significant challenges for humanity in the age of information; an issue that is only growing in prominence worldwide. In all its severity, there are ways of countering disinformation including the one online: pressuring the social media giants, task forces and penalties, and education.

Moreover, in spite of the rightful concerns, if correctly administered, these proposals recognise the value of free expression and actively guard it. In order to appreciate that, however, we need to first look into the past and explore the thoughts of philosophers such as Aristotle and Descartes.