In order to celebrate the fact that Perseverance reached the Red Planet, I decided to write the overview of us, Terrestrians and our history with Mars. The NASA Mars Exploration Program currently has five operating missions on the Red Planet, all with the same goal: answer question “Is there life on Mars?”.

But let’s start from the very beginning, shall we? 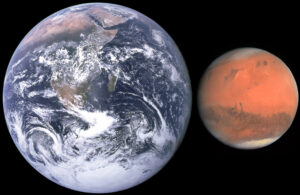 It is hard to say when was the first time that Mars was recorded as a wandering object on the night sky, but it is known that by 1534 BCE ancient Egyptian astronomers already knew about its retrograde motion. Later, Babylonian scientists would regularly record the position of the planet, and thus make systematic observations of its behavior. They even developed some arithmetic techniques to predict the future position of the planet.

The name itself – Mars – comes from the Roman god of war. This association was made due to the planet’s red colour (which is an effect of the iron oxide on its surface) which since ancient times brought to mind blood.

The first telescopic observation of Mars happened long time after the planet was first spotted. In 1610 Galileo Galilei, Italian astronomer and physicist, in his short book entitled “Starry Messenger” published his initial astronomical observations made via the use of telescope.

Starting in 1964, NASA began sending Mariner spacecrafts to Mars as a part of their Mariner program, which aimed to investigate Mercury, Venus and the Red Planet. There were 10 Mariners in total, however 6 were designed to perform flybys (close-up scientific observations) on Mars. Although Mariners 3 and 8 suffered from malfunctions, Mariners 4, 6, 7 and 9 successfully managed to analyze the Martian atmosphere and surface, as well as transmit the data and photographs back to Earth,

In 1975 NASA launched the Viking Project, which was the first successful U.S. mission to land a spacecraft on the surface of Mars. Two identical aircrafts, each consisting of an orbiter and a lander were built, reached the surface of the planet, ready to take photographs, record scientific data and conduct three biological experiments, designed to find possible sings of life. Although no clear evidence was discovered, the information provided still allowed for analysis of “an enigmatic chemical activity” in the Martian soil.

From this, scientists conducted a theory that Mars is self-sterilizing, as the combination of ultraviolet radiation saturating the surface, the extreme dryness of the soul and the oxidizing nature of the soil chemistry prevents the formation of life. Furthermore, not only did the Vikings deliver important data about the planet, but also surprised the technical staff at NASA by operating for over 1000 day, instead of the designated 90 days.

Although for more than 10 years after launching the Vikings NASA didn’t send another spacecraft onto the Red Planet, from 1992 Mars has been another a constant raid. An orbiter Mars Observer, launched in September of 1992, was lost during its interplanetary cruise phase, but just four years later another orbiter, Mars Global Surveyor was sent, with a company of Pathfinder rover. The orbiter studied the entire Martian surface, atmosphere and even the planet’s interior.

Mars Global Surveyor allowed for the discovery of repeatable weather patterns, local magnetic fields in the crust (rather than a global magnetic field as in the case of Earth) and provided the first 3-D views of the north polar cap. The rover, on the other hand, transmitted images from its landing, provided chemical analyses of rocks and soil, and data on weather conditions.

All these information suggested that once Mars was warm and wet, with water in a liquid state and much thicker atmosphere.

In 1998 Mars Climate Orbiter was lost on arrival, followed by 1999 crashes of Mars Polar Lander and Deep Space 2 probe.

Then in 2001 Mars Odyssey orbiter took measurements which allowed for the creation of maps of minerals and chemical elements present on the planet’s surface, as well as for the identification of regions with buried water ice. In 2003 Mars Express orbiter conducted investigation regarding the Martian geology, topography, environment, atmosphere and history of water, which all allowed to getting closer to answering the question “Is there life on Mars?”.

In the same year rovers Spirit and Opportunity studied the geology and made atmospheric observations. Their investigations disovered evidence of ancient Martian environments, where the habitable conditions existed, and therefore which could have supported microbial life.

Furthermore, the rovers sent back to Earth photographs of the terrain, in full color and in high resolution.

Mars Reconnaissance Orbiter, sent on a reconnaissance (well, that’s where its name came from) of the geology and structure of Mars, in order of providing a detailed imaging of any obstacles that could potentially jeopardize the safety of future missions, like the Phoenix Scout lander’s, which arrived on Mars two years later. Phoenix Scout continued the job of its space-tech ancestors – detailed analyses of the Martian surface and atmosphere, all in search of the evidence of life – current or past.

Rover that should be quite familiar to most of us, Curiosity, arrived on Mars in 2012 and since then has spent more than 75 000 hours traveling the Martian landscape. Using its 17 cameras, lasers to vaporize and study small pinpoint spots on the ground and a drill to collect powdered rock samples. Curiosity still hunts for rocks that formed in water and/or have sings of organic matter.

MAVEN orbiter’s main mission was to obtain the critical measurements of the planet’s atmosphere, so that the scientists would get a chance to understand the drastic climate change that happened on Mars throughout its history. Furthermore, the data collected could also be used to analyze how fast the atmospheric gases are being lost to space today.

In 2016 EXOMARS orbiter and lander, although managed to successfully enter the Martian orbit, crashed during the touchdown.

Perseverance – is there a life on Mars?

And this brings us to now – the time when Perseverance is exploring the Jezero Crater, which is believed to have once been flooded with water. Similar to its predecessor Curiosity, it carries 19 cameras, 2 microphones, 7 primary payload instruments and a mini-helicopter called Ingenuity, which will soon attempt the first powered flight on another planet. Perseverance’s mission does not differ from the previous quests – it all comes down to the question stated in this article a couple of times now: “Is there lie on Mars?”.

In-depth analysis of the Martian surface, collecting rocks and soil samples, testing oxygen production from the atmosphere, seeking out environments capable of supporting life forms, searching fro evidence of former life – that’s what is happening as you’re reading this paragraph.

During all these years of exploration did we ever stop to wonder why we are so obsessed with finding life on Mars? Is it because we are so afraid of being alone in the universe? Are we hoping that Mars will be our “Planet B”? Or maybe we are just curious, maybe it all comes down to our ingenuity and perseverance in seeking out more and more, discovering new places, exploring what was once thought to be impossible to reaach. Or maybe we are all poets at heart – we crave to unearth what may or may not hide on the Red Planet, because we know the Blue Planet all too well.

This website uses cookies to improve your experience while you navigate through the website. Out of these, the cookies that are categorized as necessary are stored on your browser as they are essential for the working of basic functionalities of the website. We also use third-party cookies that help us analyze and understand how you use this website. These cookies will be stored in your browser only with your consent. You also have the option to opt-out of these cookies. But opting out of some of these cookies may affect your browsing experience.
Necessary Always Enabled

Any cookies that may not be particularly necessary for the website to function and is used specifically to collect user personal data via analytics, ads, other embedded contents are termed as non-necessary cookies. It is mandatory to procure user consent prior to running these cookies on your website.