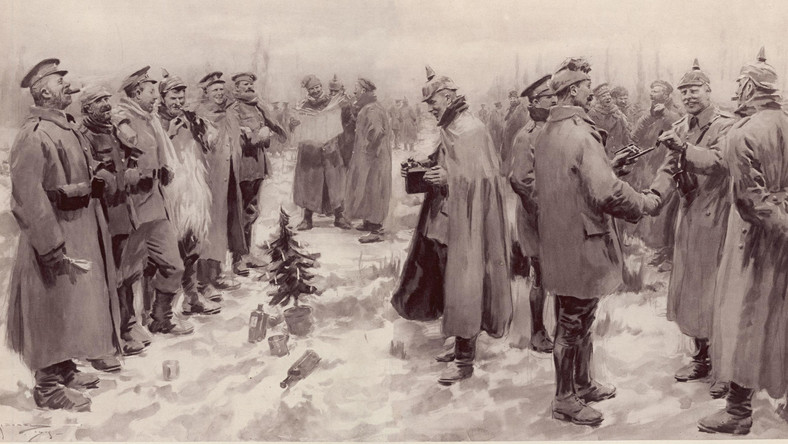 In the recent days, Christmas is a very special day for plenty of reasons. Today, it’s something more than a Christian celebration of Jesus’s birth, in the mass culture it’s a day when people forget their disputes, grudges and negative emotions. Instead, they try to be friendly to everyone. But how far this can go?

107 years ago whole Europe saw the true strength of Christmas spirit and something unbelievable happened – during one of the bloodiest wars ever, soldiers from two sides stopped fighting and celebrated this day together.

On 28th of August 1914 the Great War began. Austro-Hungarian attack on Serbia turned into conflict which engaged all of contemporary Great Powers. Both sides hoped for a quick victory – for example Germans followed the Schlieffen’s Plan which predicted that France would fall before Christmas that year. This idea failed due to German defeat in the Battle of Marna (5th – 9th September). Soon the Western Front evolved into trench welfare – in this type of conflict many people die and the frontline almost doesn’t move at all. Today, this war is remembered with a terror. Christmas truce began on 24th of December, near Ypres (Belgium). First groups to begin contact were Saxon units of German Imperial Army and Welsh Fusiliers. The celebration of Christmas began with decorating trenches. Later on, both sides began singing Christmas Carols and shouting wishes to the enemies. Then soldiers collected corpses of their fallen friends lying on no man’s land (territory between trenches).

On a daily norm they wouldn’t do it, it was a place where bullets where flying and the chance of being killed was extremely high. But these days both trenches were calm. In some places prisoners were exchanged.

Exchange of gifts and wishes 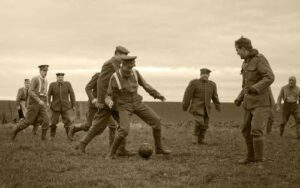 One of the most famous moments of the so-called Christmas Truce was a meeting of Captain Stockwell and one of German commanders on the neutral no man’s land, where they symbolically exchanged gifts and wishes. Welsh captain received a beer keg, whereas German officer was given a plum pudding. They agreed to sign informal truce until 8.30 AM on Christmas Day, but soldiers were to remain in trenches.

However, until 12.00 all British soldiers along the frontline spontaneously stopped fighting Germans. The soldiers didn’t rush to continue bloody fights. The remaining part of day was spent on talking, befriending and exchanging gifts (such as cigarettes, souvenirs or insights of their Christmas packages). Very often they visited the enemies’ trenches. They even played a football game on a no man’s land – it ended with the score 3:2 for Germans, when the ball was destroyed by the barbed wire.

In some places the truce continued until last day of the year, Scottish soldiers remained calm until 3rd of January 1915.

British General Staff was 27 kilometres from the frontline, so at first they didn’t know about the truce. But when the news reached this place, it wasn’t met with joy. Similar thing happened with German General Staff. On both sides generals and high officers tried their best to end the moments of peace and continue the World War. Some Saxon regiments protested.

The ceasefire was finally ended when snipers from both sides began to shoot to soldiers who still tried to enter the enemies’ trenches. Soldiers from Saxony were ordered to retreat and they were replaced by the fresh Prussian colleagues, who were ready for new battles. This was the end of the Christmas Truce.

After one year, Germans tried to repeat the events from 1914. The times have changed, however. In 1915 Kaiser’s army used chemical weapons, British suffered heavy losses in Ypres this year. In this situation hostility between two armies was much higher and even Christmas wasn’t strong enough to stop fighting for some time. Main commanders did all their best to prevent situation from repeating – for example, they were planning shelling for the Christmas Day and often moved their troops from place to place, which would prevent soldiers from any trials to reach contact between trenches. In 1916, after horrors of the war which affected both sides no one thought about repeating events from 1914.

Interesting facts about the truce.