From 27th to 30th January 2015, Habitat For Humanity Raszynska went for its first Building Project to help with renovating the staircase of the Karczewska 33 building in Warsaw’s Praga Południe.

We worked everyday during the one week of our winter break, along with the volunteers from Jerusalem, who came to Warsaw to build during the Habitat for Humanity Global Village, the construction workers and the building’s inhabitants themselves.

Finding the apartment building on Praga was really difficult. Almost everyone got lost doing so. Once you have made it to the correct building it seemed like a haven from the cold that it was outside. The stairwell was full of Habitat volunteers, young and old, covered from head to toe in white jumpsuits and white hard hats with Habitat for Humanity logos on them. A passionate group of young people worked alongside the Raszynska kids. That group was from Jerusalem International School and was made out of students of different religions and nationalities.

For us it was a great chance to meet new people and discover new cultures. Upon exploring the stairwell, the Raszynska youth found out what their „real job” would be. We were supposed to be translators. Rather than plastering the walls the Raszynska kids had a pleasure of translating to the international volunteers the commands of the construction workers. Other than that, we got the tools and stripped the paint from the walls. Unlikely friendships were formed between the kids from Jerusalem and the Warsaw kids.

Christine Berka, Habitat for Humanity Fundraising Chairperson, who worked for a couple of days during the building, tells an anecdote, ”While plastering the walls I made friends with the girl named Zoe. She told me that she was very excited about Starbucks in Praga next to their hotel. The closest thing she has to Starbucks is Star’s End Bucks in Bethlehem [religious pun intended].”

„Other kids, though, only wanted to know the nearest alcohol store,” adds Tadzio from pre-IB.

„I got to know a lot of new things, because I’ve never built before in my lifetime. I had a real feeling of helping the people. I really liked the outfits, too. There was dust everywhere,” says Monika Bui, Habitat for Humanity Raszynska Secretary. 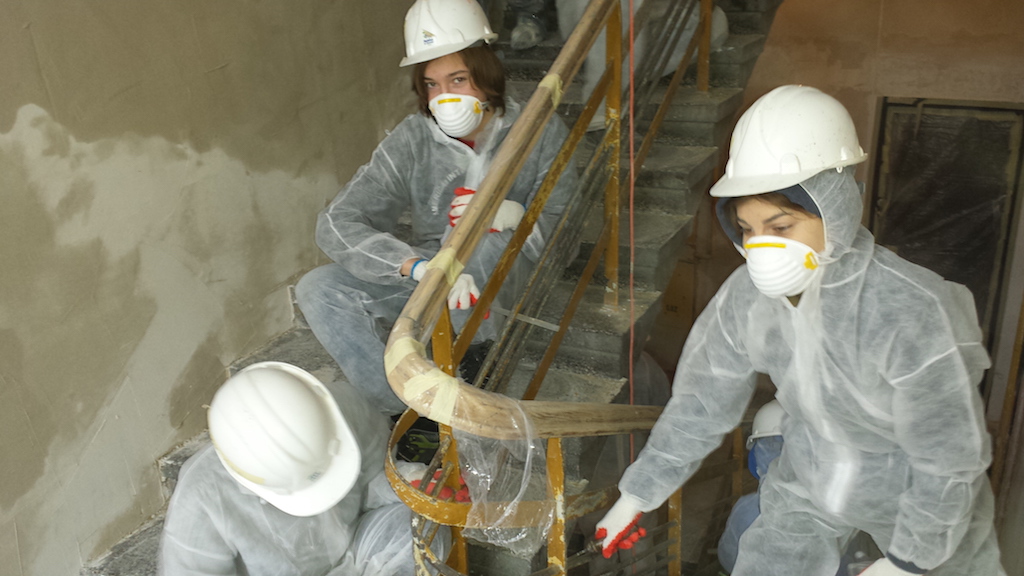 “The greatest satisfaction for me, as a Habitat for Humanity volunteer, is that I can see the effects of m work and how it directly triggers the change of people’s living conditions for better. The feeling that what I’m doing is meaningful and helpful for other people, makes me motivated to act and to build,” tells us Monika Olejnik, pre-IB, “I was positively surprised with how warmly the building’s inhabitants have welcomed us.”

Seeing the Habitat for humanity building process up close was inspiring. Working together with kids from other cultures provided us a chance of learning tolerance and cooperation. Furthermore, the current inhabitants of the apartment complex were incredibly grateful to us for fixing up their stairwell and offered us coffee, tea, and chocolate. You could tell who was from Jerusalem as they had not yet learned how good Michalki are.
The Habitat for Humanity Raszynska Campus Chapter looks forward to further builds in the future as we still have much to learn and surely much to build.