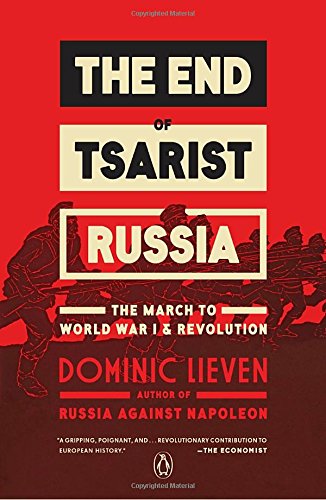 Lieven’s The end of the Tsarist Russia offers an alternative, Russian perspective on the origins of the First World War. This refreshing analysis is based on Russian archives, which makes it uniquely detailed among the newest studies of the events leading to the disaster of 1914-1918 that have been proliferating recently to honour the conflict’s centenary.

What sets this book apart, is that the archival work of Dominic Lieven brings political protagonism back to individuals often overlooked by modern historians. With many personalities involved, his analysis of Russian pre-war politics becomes much more humane and plural. For instance, apart from Tsar Nicolas II and his foreign minister Serge Sazonov, one becomes acquainted with Prince Grigorii Trubetskoy, a diplomat, veiled behind the autocratic powers of his sovereign, with disproportionate influence on Russian politics. Such nuances allow the reader to fully appreciate the tremendous complexity of the decision-making in 1914. All the same, the author pays a lot of attention to structural factors characteristic of Russia, yet placing them in the wider, European context.

At the same time, the archives allow one to consider the origins of the Great War from the perspective of the contemporaries, who were not as naïve as they are sometimes presented. Probably the best example of this, is the brilliant memorandum written at the outset of the war by Petr Durnovo, Russia’s former minister of the interior, in which he predicts, with tremendous accuracy, the domestic consequences of a potential conflict. Such an encounter with Tsarist realities would not be possible, had it not been for the numerous documents uncovered by the author.

Yet this sharp focus on the archives has its disadvantages. As the book is written solely from the Russian perspective, the agency of western great powers (that is of Great Britain and France) is largely downplayed. Similarly, actions of Germany and Austria-Hungary are generally described rather than analysed. As a result, their crucial moves during the July Crisis may seem largely unprovoked, which, if one is not wary of the implications of Lieven’s choice of sources, can create a reductionist view of the origins of the conflict.

One may also argue that The end of the Tsarist Russia is the most valuable and interesting to those who have already studied the origins of the First World War. This is for two reasons. Firstly, full appreciation of the value of the book requires awareness of the broader view of the causes of the Great War (one of the most accessible holistic books on the origins of the war has been written by Christopher Clark, see Sleepwalkers). Only then is one able to notice subtle differences in the author’s interpretation that make this book extraordinary.

Secondly, The end of the Tsarist Russia lacks narrative descriptions of events fundamental to the causes of the war, such as the Moroccan Crisis of 1911, or the assassination of Archduke Franz Ferdinand itself. Instead, it immediately uses them as part of the analysis, while giving justice to events from Russian history which are rarely included in the canon, the most significant among them being the Revolution of 1905. Consequently, to those who are novice to history or origins of World War One, the book may appear dull and difficult, which definitely is not the case (this is not to suggest that Lieven’s work is not intellectually demanding).

Anyone looking to expand their horizon on the causes of the First World War, but also experience a slightly different approach to history-writing, will certainly enjoy The end of the Tsarist Russia. It is an extremely valuable addition to a plethora of works written by the very best historians on this subject, and perhaps, because of its novelty, in many ways the greatest of them all.