By now you probably have seen or at least have heard of the viral video capturing 108 catcalls to a woman silently walking the streets of NYC. If you haven’t yet, you definitely should! Each of the comments from the strangers is a catcall – a comment that objectifies and sexualizes a woman. That includes seemingly polite statements such as „smile” and „hello”.

Women face disrespectful and threatening comments on daily basis and the video proves just how common this is. The issue impacts most women at some point, for further proof consider the research below from the organization Stop Street Harassment. In some cities like Indianapolis and California Bay Area the percentage of women who have experienced street harassment is 100%! 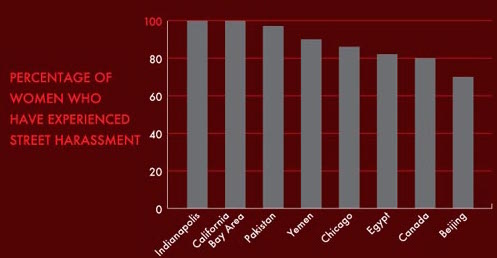 Why is catcalling not an attempt to be nice? Why should it be considered by everyone to be disrespectful?

Most of you are probably wondering why „smile”, „damn girl”, „you look nice”, winking or whistling is threatening and makes women feel unsafe… Believe me, it does! Street harassment makes women feel uncomfortable, powerless and objectified. Those comments suggest that we do not own our bodies while being in public because men sexualize us without our consent.

For those of you who argue that comments like these are certainly appreciated and wanted or that catcalling is a harmless way to greet someone on the street, I have a question to ask you: If catcalling is a way to make someone’s day better, to politely greet a person walking by, why not extend such comments to men too?

Blogger and comedian Elon James White made this point by tweeting and sheering a hashtag #DudesGreetingDudes, claiming that this is NOT just about greeting females on the street and that it is an unwanted compliment that makes women feel uncomfortable. Check out few of his tweets below! 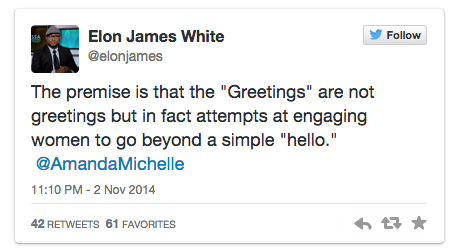 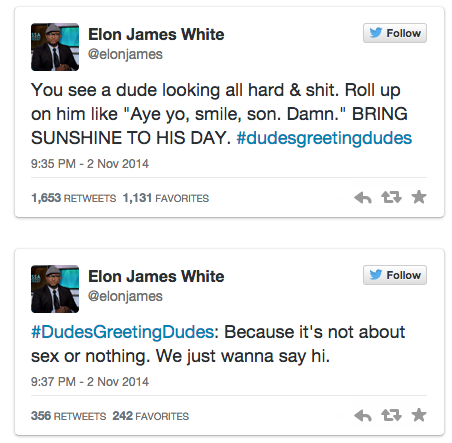 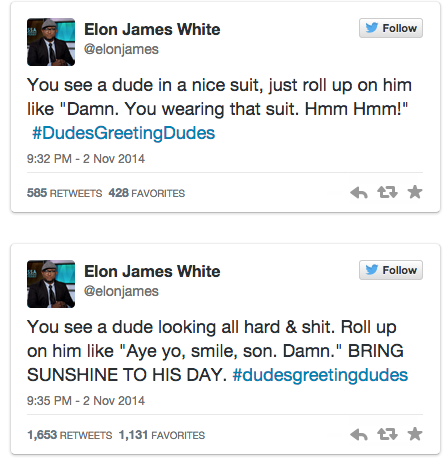 Although men think that this is a form of flattery which is sincere and not meant to offend anyone, in most cases it is very uncomfortable and demeaning to women. There is a difference between paying a woman a respectful compliment and catcalling her.