So it is true. Contrary to conventional wisdom, aliens have made home on Earth. At least that’s what we’re led to believe when examining pictures of the Sanzhi Pod City in Taiwan. These brightly coloured, flying saucer-shaped buildings have left little to the imagination as to what a UFO should look like. Unfortunately, alien enthusiasts might have to face a huge disappointment because the Pod City was in fact a vacation resort.

It was designed by Finnish architect Matti Suuronen in another rendition of the Futuro Houses. These were round, prefabricated houses of fiberglass-reinforced polyester plastic; easy to transport, construct and as easy to dismantle. However, unlike Suuronen’s previous single projects, the Sanzhi Pod City was to house many more residents. After all, it was intended as a holiday location for the U.S. military stationed in East Asia.

Construction began in 1978. Two years later, the project was stopped and abandoned due to financial losses (the main developer is said to have gone bankrupt) and according to locals, because of several deaths in the area. Rumour has it that during the building stage, the workers destroyed a Chinese dragon sculpture and through this, brought upon themselves the misfortune. Other accounts also suggest that many skeletons were unearthed. Presumably, the site was formerly a burial ground for Dutch soldiers.

Either way, the Sanzhi Pod City was never opened to the public. With years, it rotted and whittled down, exposed to the natural elements and vandalism. It became a small-scale tourist attraction, visited by just anyone who wished to experience the ghost town’s haunting aura. MTV found some interest in it as well and actually used it as a filming location for one of their movies. 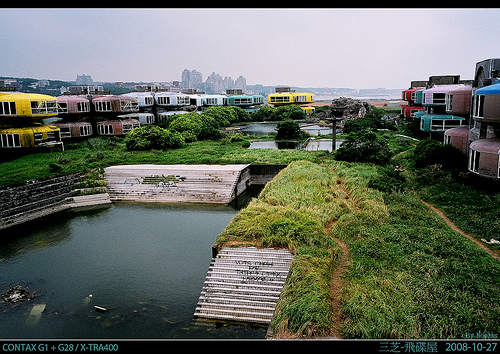 Despite many voices of locals, who expressed the desire for the City’s preservation, it was torn down. This was back in 2009/10 (the City stood for around 30 years!). Nowadays, the Pod City is no more, but plastic remnants may still be found lying around the site. New plans are rumoured to be drawn up at the moment, of a new and entirely different holiday resort. Let us hope that this time around; the investment will be more successful.