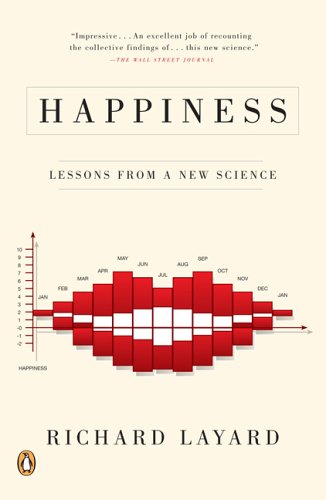 Richard Layard’s „Happiness” deals with a paradox of the last 50 years – why people all around the world have become richer and healthier but no happier. The higher income people get, the less it increases their happiness. It can be explained by the law of diminishing marginal utility; each unit of income more provides less happiness because humans tend to adjust their standard to the current situation and a good considered to be a luxury in the past (ex. a car) becomes just ordinary when the income increases. The ability to habituate may be beneficial in a crisis situation (ex. there is war and humans have to get used to eat less) but it in a state of peace it creates a vicious cycle of constant escalation of needs and wants.

“We will find neither national purpose nor personal satisfaction in a mere continuation of economic progress, in an endless amassing of worldly goods…”

David Cameron, prime minister of United Kingdom, supports the view that statistics that have been used to date to assess national achievement are incapable of showing what really matters. Even before the financial crisis of 2007/8 he was aware that ”it’s time we admitted that there’s more to life than money and it’s time we focused not just on GDP but on GWB – general wellbeing.” Speaking at the Google Zeitgeist Europe conference, he added:

„Wellbeing can’t be measured by money or traded in markets. It’s about the beauty of our surroundings, the quality of our culture and, above all, the strength of our relationships. Improving our society’s sense of wellbeing is, I believe, the central political challenge of our times.”

Today, it is possible to measure the value of happiness using scientific methods. Layard says that knowing the trends in happiness fluctuations is crucial to undertake suitable action to increase its total value. However, it could be argued that as long as the currently applicable regulations and policies seek to maximize the total benefit and reduce the total suffering, knowing the exact value of happiness is actually unimportant. In fact, Layard emphasizes that one’s happiness is directly dependent on their comparison to other’s well-being; therefore, comparing the values of happiness for, say, particular nations may be saddening for the nations with lower scores.

So can money buy happiness?

The newest findings, by researchers at the University of British Columbia and Michigan State University, shine a light on an interesting conclusion: While more cash doesn’t increase joy, it does decrease sadness. “Having more money provides more options for dealing with adversity,” explain authors Elizabeth Dunn, Kostadin Kushlev, and Richard Lucas.

“Wealthier people may feel a greater sense of control than poorer people when difficult situations arise.”

Overworking is a major problem of today’ society. People seek to achieve the highest level of income possible (which doesn’t really make them happier) becoming even less happy by overloading themselves with duties and stress on the way. The problem of ‘rat race’ is ubiquitous today; it is not only about the adults who have to compete for job, promotion or income rise but also about the kids have to be the best to get into a good school or, later on, university.

Generally speaking, as people become richer they decide to sacrifice part of their potential income on enhancing their private lives. Interestingly, it doesn’t work in the US. They have one of the highest incomes but work the longest hours among the rich countries.

Unemployment proves to be a factor having a tremendous impact on lowering the happiness. It destroys self-respect, social relationships created by work, and reduces income which enables people to live decent and happy lives. Surprisingly, high labor mobility does also adversely affect happiness– it destabilizes community and family life.

As the researches have proved, self-reported happiness clearly reflects one’s well-being. Thus, people who say they are happy do actually feel better. If they do, they are able to make lives of others more enjoyable, by giving them a helping hand for instance. If people cooperate in such activities, social utility is maximized. But the state’s role in the process is not to be forgotten. Only by introducing appropriate policies and taxation schemes – which, amongst others, work to preserve beneficial work-life balance – the state enables its citizens to act in such a way so that it maximizes the total happiness.