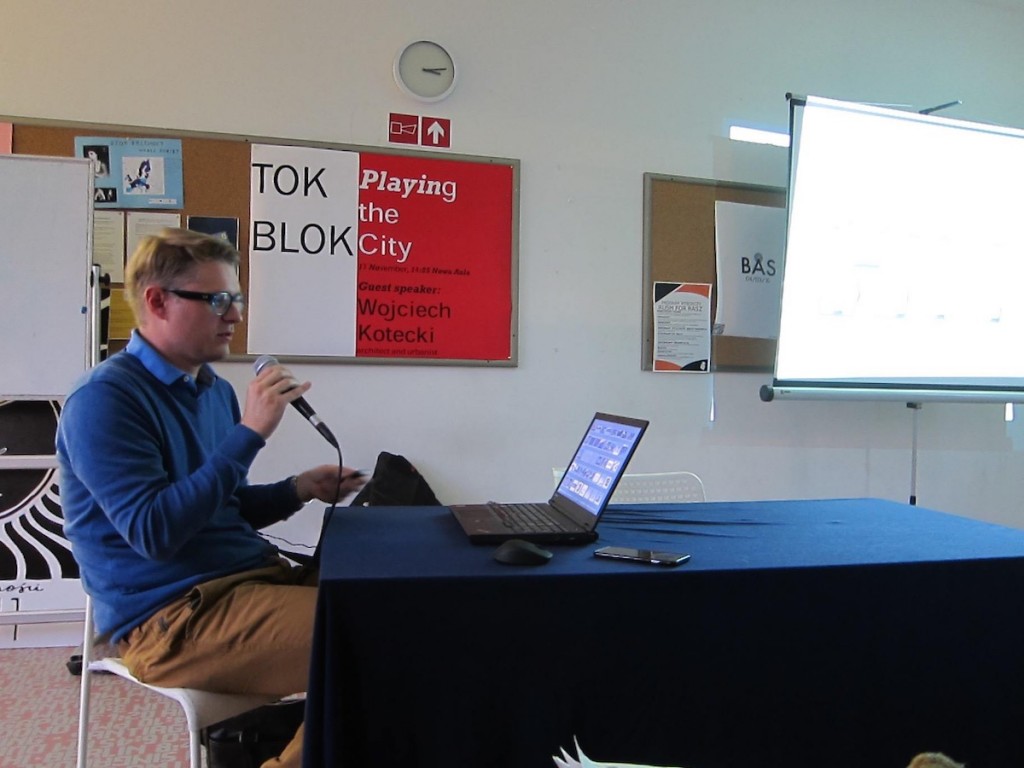 On Tuesday 17th November 2015, we had the pleasure to listen to a lecture given by Wojciech Kotecki, an renown architect and urbanist. The title of the lecture was 'Playing the City’. First, the lecturer introduced himself and showed us a couple of pictures of the convention bureau in Katowice, which he and his colleagues had designed, and which is one of his favourite designs. He mentioned also that his project of the Town Hall in Konstancin was chosen the best of all the submissions and is being realised now. The architect is also a contest judge in the Polish Architects Union.

After listing most of the projects he has done in the past, Wojciech Kotecki told us what inspired him to become an architect. He said that in the past he was not the best student and he did not like to learn. His passion was video games. He was amazed by the openness of the world in games like 'Sim City’ and that one could create a whole world and navigate in it. After some time however, this was not enough anymore, Kotecki did not want only to experience the world in video games, he wanted to contribute by helping creating it. He though then that it would be even better to do this in real life. This is why he decided to become an architect.

He showed us next the virtual concept of the harbour in Praga district, another project of his. We were explained that first, there is a virtual project made, to visualise how the building would look like, which is made just like the universe in video games. The concept is then turned into reality, which is the case for Kotectki’s project which is now being built.

Then, he told us about a project called ’19th district’. It is a complex of blocks of flats situated in what was an industrial area before. He explained that the industrial and rail areas split Warsaw into the northern and southern parts and it used to be difficult to get from one part to the other, because there were not many roads linking them. These areas are now bare, but there is much potential for those areas as people are starting to move back from the suburbs. As there is not much infrastructure in those areas, the group of architects had to imagine what the neighborhood would look like in the future to plan how their project would look like.

Their idea was to create open areas and semiprivate patios so that the ’19th district’ would not be such a closed space as 'Marina Mokotów’ which is heavily guarded and is a very restricted area. The architects wanted the buildings of the ’19th district’ to be different but form a harmonious whole. The flats themselves also were not to be the same so our lecturer designed a couple of flats and then filled the planned volume of the building like in a game of 'Tetris’.

In the end, he shared with us some predictions about how Warsaw would look like after a couple of years, how the shape of the parcels influences it and how they reflect the history and what was built on them. He told us furthermore what are the dangers of every new building trying to be different, exceptional and an icon of the city. He said also that the streets of Warsaw would be narrowed so that people would use their cars less often, and use public transport, bikes or just come live in the city centre to be closer to their workplaces. Kotecki concluded his lecture by answering the question of several students. One question was whether designing the city was better in games or in real life. He said that it was definitely more satisfying to do it in real life!